The Triumphant Return of Miss Angie! 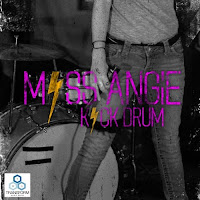 A native of Springfield, Mo., Angie Turner, better known as Miss Angie, first introduced her signature blend of rock, electronic and pop sounds on debut album, 100 Million Eyeballs, released by Myrrh/Word Records in 1997. The record spawned a No. 1 CHR single with “Lift My Eyes,” whose music video was featured on “WOW 1997-98: The Year’s Top Christian Music Videos” DVD. Miss Angie followed her freshman release with a second album, Triumphantine in 1999, which again produced a No. 1 CHR hit “Dancin’ In My Head.” The two critically acclaimed projects additionally afforded Miss Angie touring opportunities alongside such artists as Sixpence None the Richer while garnering her major festival appearances, including Cornerstone, among others.

“Kick Drum” announces the triumphant return of Miss Angie to the forefront of Christian Music. Mixed by Jonathan Castelli (Lady Gaga), this infectious new single is already proving to have a huge impact in its first week at Christian CHR & Rock radio. Preview/buy the single NOW on iTunes!
Posted by David C. Coleman at 12:30 PM